Live a Breakthrough Life and Fulfill Your Destiny

"No Eye Has Seen, No Ear Has Heard and No Mind Has Imagined What God Has Prepared For Those Who Love Him"

I HELP PEOPLE, LIKE YOU, Walk in Your Destiny and Live Your Calling

For too long, followers of Christ have been living below what God has intended for them.  Many struggle in their lives.  Many are living a life of frustration and fear. They've been living a life void of Kingdom power.  In other words, they haven't been able to get Kingdom principles to work for them.

The truth is, everyone has a destiny and calling from God.  Jesus told us to go and make disciples of all nations.  But, along with not being able to get Kingdom principles to work for them, they've been told over and over God has a plan for their life.  Yet, no one gives guidance on how that plan is discovered.

I want to be your lifestyle coach, helping you with having Kingdom principles work for you, in order to step into your destiny and fulfill your calling.  I want to be your coach, through writing (books, courses, booklets and blog posts), as well personal coaching.

This site is a work in progress. So come back, as the site and my offerings grow.

THIS IS MUCH MORE THAN THE MESSAGE OF SALVATION ALONE!

Those nations include states, provinces, counties, parishes, towns and cities.  And you have been called by God to go into those systems and structures to live a life according to Kingdom principles and exercise Kingdom influence in those arenas.  It doesn't matter if you're a housewife or CEO of an organization, your life has a destiny and you have a calling from God.

When you discover your true calling, and how to live within that calling, according to Kingdom principles,  you'll experience several things.

Below, you'll see eight areas or spheres of influence, in society, where you and I are to exercise Kingdom influence. 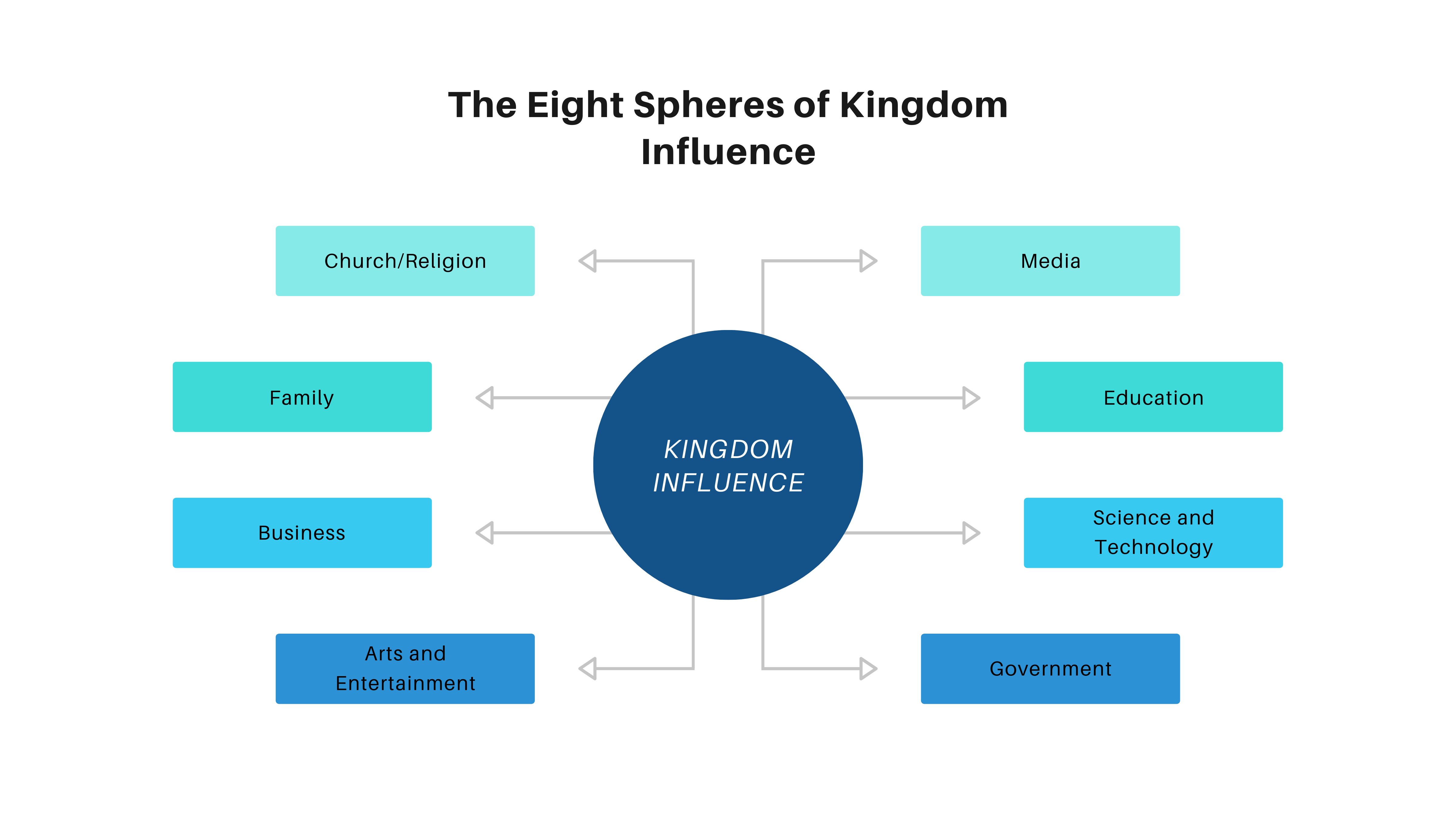 Within the eight spheres of influence illustrated above, you're called to minister divine revelation, supernatural power and divine love.  There are people in the world who are desperate to see the Kingdom of God demonstrated and manifested.

People in all of the spheres of influence, are desperate for superior and creative solutions to problems they're facing  Whether a business, looking for a great marketing strategy, a creative desiring that great movie, screenplay, photographs or books, education looking for effective teaching methods or a church desiring superior strategies for reaching its community, superior ideas are needed.  In your sphere of influence, you'll need to operate in divine revelation.  You'll need to be able to hear God's voice.

In the gospel of Luke is recorded when Jesus was led by the Spirit to be tempted by Satan after Jesus was baptised.  One of the temptations is recorded in Luke 4:5.  Jesus was led by the devil to a high place and was shown all the kingdoms of the world in a moment of time.  The devil told Jesus;  "I shall give you all this dominion and its glory, for it is delivered to me, and I give it to whomever I want".  As a result of the fall, the dominion that had been given to Adam was handed over to Satan.

In 2006, there was a movie based on the book "The Secret" by Rhonda Byrne.  The movie and the book addresses the "Law of Attraction".  Since that time, many corporate trainers, coaches and personal development trainers have been using principles from the Law of Attraction, in their coaching and training for corporate America.  Some have taken these trainings into Fortune 500 companies.

The Law of Attaction, as taught in the movie and the book, has been embraced by New Age, which has influenced many coaches and trainers.  Yet, there is also a true "Law of Attraction", where God's favor and supernatural power are attracted.  So, it's imperative that you live out your calling in whatever sphere of influence you've been called to in supernatural power.

Whatever one's calling, whether "secular" or "Christian", one of the variables, especially for entrepreneurs is faith.  True faith is only activated by love.  When you and I go into the eight spheres of influence, we need to go in, not with a superior attitude, but in an attitude of love.  Thus, you need to operate in your calling in divine love. 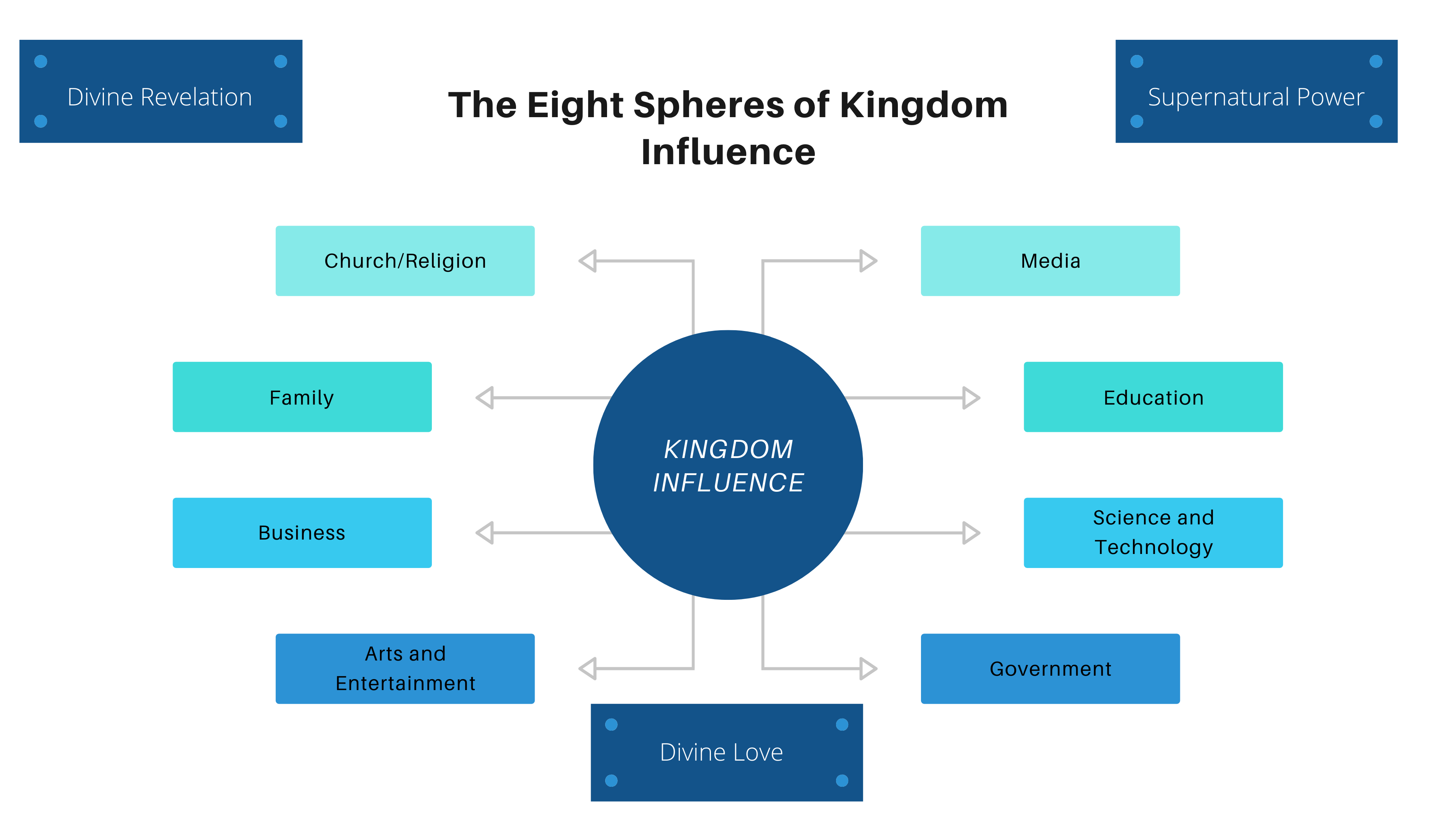 GOD HAS A PLAN

Have you ever heard that?  God has a plan for you.  I heard that over and over.  Yes, God definitely has a plan for you.  I don't know about you, but the problem for me, was that no one could ever help me discover that plan.  No matter who I asked, I received the same, general answer.  "Just pray and God will show you".  But there had to be a process where I could discover what my calling and destiny was.  I wasn't satisfied being just "in a job".  But, that's what I was in...continually...just a job.  I finally discovered there is a process.   That process is what God used to lead me into my calling.   But, it wasn't until He led me through a transition.

YOU ARE IN TRANSITION

When God is or will be leading you or calling you to something new, He will also lead you through a transition, on your way to your calling.   These days God is calling many of His people into something new...a new calling...a new purpose.  Often it's something they're totally unprepared for or think they are unprepared for.   The transition is often difficult.  It's not difficult because of the transition itself, but because often, one doesn't want to let go of the old, in order to make room for the new. As I have successfully navigated many of  my own transitions, I can help you make your transition more smooth.  Your past has left you clues. But remember;  nothing in your past has totally prepared you for the future God has for you.  "Behold I am doing a new thing" (Isaiah 43:19)

A BIT ABOUT DAVID

Hi, I'm David Powers.  I am a former pastor and spent 25 years in corporate America.  I help people, like you, fulfill their destiny and to  discover and live their calling.  Many people are in the situation, where they feel unfulfilled in their careers. They don't feel they are contributing anything or have significance.  Perhaps, you're in the same position right now.

At the same time, quite a few don't feel their careers, if not in a traditional "ministry" position are validated by their churches and pastors.  They feel their so called "secular" career has nothing to do with ministry or the Kingdom.  This couldn't be further from the truth.  The reason is many, in the body of Christ, have separated the "sacred" from the "secular".  They don't believe anything outside of their "church life" is related to their faith or the Kingdom of God.  Their jobs, are seperate from their "church life".  But God never thinks this way.  His Kingdom is over and exerts dominion over the "secular", as illustrated below. The grey, shaded area is engulfed in and is within Kingdom dominion. 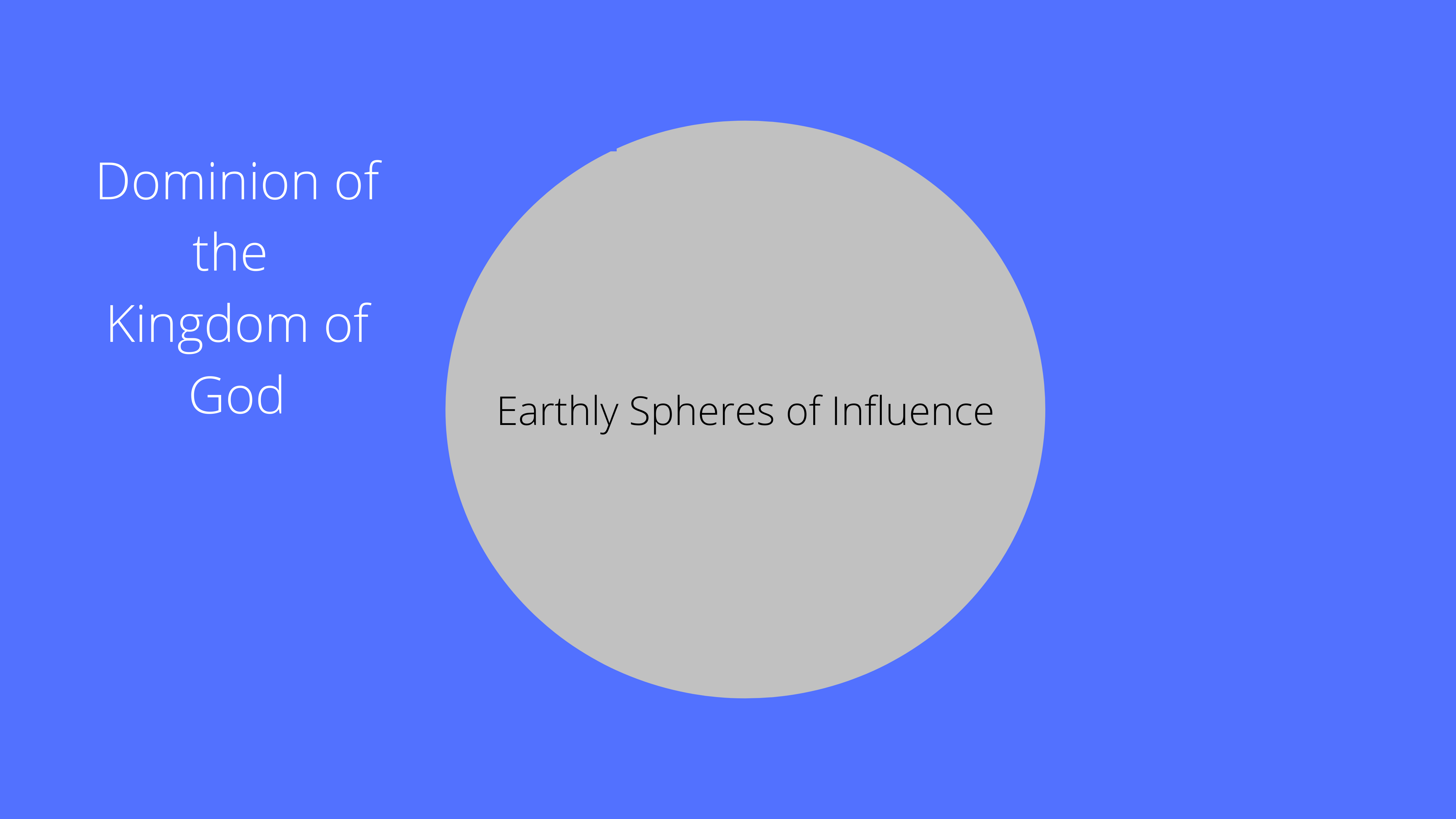 For quite a few, God is beginning to lead into transition.  In that transition they and perhaps you are sensing God leading you in a new direction.  Yet, you're confused, bewildered and perhaps a little scared of that direction.  I was. You may think nothing you've done has prepared you for where He's taking you. Or you're tired of feeling insignificant and desire to fulfill the calling and destiny He's gifted and wired you to fulfill.

I understand.  I've been through significant transitions.  I'm a former pastor.  I transitioned out of the pastoral ministy, when I saw how unfulfilling it was for me.  It was more politics than ministry.  I went through an embarrassing and unwanted divorce. Those things aren't supposed to happen to Christians.  But, God, in His grace transitioned me through that.  He led a wonderful woman to me, who became my wife, after praying and declaring Proverbs 18:22.

In 2015, in bed one night, I was sensing a lack of fulfillment in my job in corporate America. So in bed, in the dark, I just told the Lord how I felt and that I put my life in His hands, to do as He willed.  Two weeks later, I was laid off from my job.  I struggled for quite awhile, but God was leading me through another transition.

After much trial and searching, the Father has led me into my current ministry, helping others enter their destiny and helping them discover their God-giving calling, no matter what sphere of influence that calling will be fulilled in.